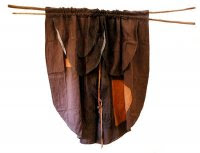 Skoto Gallery is pleased to present Ndokalé Gorée / Homage to Gorée, an exhibition of recent mixed media work by the Senegalese-born artist Souleymane Keita. This will be his first New York show since his last appearance in the 1990 landmark exhibition Contemporary African Artists: Changing Tradition at the Studio Museum in Harlem. The reception is Thursday, May 7th, 6-8pm and the artist will be present.

Souleymane Keita’s recent work is characterized by a carefully structured and organized rhythm of dynamic lines and organic forms, a mastery of the nuances of color and composition, a deep sensitivity to texture combined with a display of emotional intensity. Widely regarded as one of Africa’s most accomplished artist of his generation, he has consistently explored the expressive possibilities of abstraction in his encounters with history and global transformation over the past three decades, and in the process developed a completely personal and original style whose true significance lies not merely in formal arrangement but in the spiritual meaning underlying the symbols, signs and metaphors in his work, while simultaneously broadening his vision and making his belief in the human experience visible.

This exhibition continues Souleymane Keita’s long-standing attempt to synthesize his search for creative excellence with a versatile, aesthetically potent ways of knowing and affecting the world around him. He has always worked in series: this selection builds on recent exhibitions in Dakar (Senegal) and Abidjan (Cote d’Ivoire), and he pays homage to the Island of Gorée, his birth place, situated off the coast of Dakar. They possess tactile qualities that are imbued with both personal and collective meanings. Also included is Homage to Al Loving, 2007, a hung and un-stretched canvas sewn into geometrical shapes and saturated with color that makes a compelling venture in a trans-Atlantic dialogue and a fitting paean to the late African-American abstract expressionist artist Al Loving whose work also thrived on experimentation and improvisation.


A LONG VIEW OF THE ARTIST FROM GOREE

Souleymane Keita is an artist who has put together a unique synthesis of forms, shapes, tonal environments via liquid flow of acrylic wash color tone stains of earth environment and life experience. The mechanics of textile applique color collage sewing, wrapping keys and hooks fisherman’s knots and net pattern of the sea. The hunter’s shirt is point of departure born in the historical struggle for creative human progress. The linear poles support the weight of the cloth and support the aesthetics and art of the journey itself. His canvas support structure has been square, round, rectangular, and loosely suspended in space. Souleymane Keita has achieved his dynamic synthesis by continual experiment with personal methods of creative construction.