The exhibition space at the main branch of the Brooklyn Public Library is a most appropriate venue in which to view Quimetta Perle’s work, since she spans the realms of fine art and book arts.  Her work, along with Andrew Zarou‘s, is curently on display in the main branch’s second floor, in the balcony cases.  Her books are arranged on the floor of those cases, while individual pictures, which stand alone, or could function as book pages, are displayed above, on the case wall.

Quimetta Perle works in a hybrid medium of graphic arts and fine arts materials applied to canvas and paper, or board, along with traditional “feminine” media such as embroidery, beads, and sequins.  Therefore, her work does not eschew the decorative sense that was anathema to many artists I’ve met in the past, but makes a virtue of it.  The current work is the brightest, most developed, and the prettiest two dimensional work of hers that I’ve seen.

“Lost in Thought,” 2006, digital print, with sequins and beads on canvas, for example, is full of the outrageous, screaming brightness of an expanse of yellow sequins.  It’s the most ambitiously scaled work (about two feet high) in the current offering.  In it, a woman’s face, covering the lower right corner of the canvas, looks out, indeed, as if lost in thought.  Her head of hair, defined by blue black hues, recedes spatially in comparison to the lighter, brighter, and more intense patterned green fabric surrounding her.  Whether this spacial tension is intended to allude to her reverie, or to some pervasive condition in which she exists is a matter of conjecture. 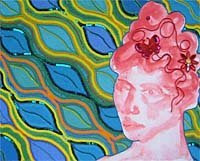 The majority of the works, smaller in scale, about 5” X 7”, show women’s faces filling up most of the surface.  They are handled simply, in the manner that Henry Matisse executed his late, calligraphic brush and ink faces.  In each case, the ink color interacts with the color and pattern within each piece as an equal partner.  These are then framed with sculpture wire forming loops or flame lashing patterns, disguised behind a row of sequins of a chosen color.

The single work I found the most exciting and attractive was one of these smaller pieces.  “Wonderland,” 2008, digital print, sequins on board and wire, appears to have the largest pictorial scale compressed within it’s boundaries, probably due to the effective combination of broad elements and the fine drawing lines that create the wings of butterflies moving about the main figure.  In this case, unusually, the figure does not fill almost the entire surface, but is confined to the middle third of an image configured like a French flag.  The majority of the background is covered with a bright, very fresh green.  The image is simply winning.

Posted by Manuel Macarrulla at 9:51 AM