"Sunrise, Cape May (Version 2)"
By Manuel Macarrulla
Gouache, 2008, 14 7/16" X 10 1/2"
This set of three pictures was commissioned of me last year.  Maybe I should say the set was partially commissioned.  Two of them, Sunrise, and Cape May Still Life, were pictured on my website, where the client first saw them.  But, while the latter was still available, Sunrise had recently sold. But that was not a problem: promptly, I offered to repaint it for the client.  The client also accepted my suggestion of a third, new painting, Morning Light (bottom), done in the same size, manner and spirit as the other two. This third image had existed only as a smaller gouache study of the scene.  With its execution the client got a set with greater impact than a single picture might have delivered. 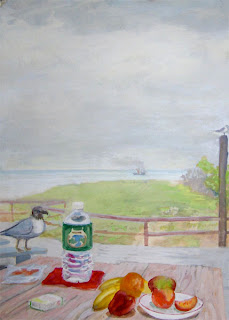 During my summer vacation in 1994 I began to do landscape studies such as these Cape May pictures in gouache, watercolor and colored pencils.  This was something of a departure, considering my prior concentration on figures done in heavier media, like oils.  But this exploration permitted many discoveries, which have also informed my recent figure work.   Through them I learned a lot about these portable media, introducing a lighter touch to my work, and about reflected color and atmosphere. Such a  change of pace can help keep the artist alert.