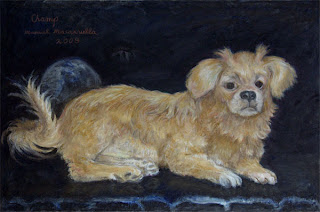 Champ
Manuel Macarrulla
Oil pastel on canvas, 2009
20" X 30"
This portrait of Champ was commissioned by his owner, Julia.
Monday, Feb. 2, 2009 -- Today I returned to Champ (begun on 1.27, and worked on sporadically since then) with an effort to see the character of the shapes and the proportions of Champ's head. Through these observations I found the key to the painting. Tomorrow I'd like to get an early start and put in a lot of hours . Wouldn't mind finishing it.
Tuesday, Feb. 10, 2009 -- On recent Champ sessions I've been very anxious over unemployment -- very hard to concentrate.
Friday, Feb. 13, 2009 -- Well, finished Champ today. Actually, I finished it tomorrow. It's 1:35 in the morning. I feel I've probably gotten what I wanted from it. Oops -- spoke too soon: it's 1:52 and I was just doing a couple of last things to it. Glad I didn't give it (the painting) to Julia this morning. And I'm supposed to photograph it tomorrow -- so that I have a record of its latest state. What will I want to do to it tomorrow?
Sunday, Feb. 15, 2009 -- The almost all black background on Champ would seem to be simpler than any other background I've painted. And yet it took a long time because the simple background was complicated to do. Those subtle tone changes were big, within the constricted tonal range, and had to be handled in particular ways.
Monday, Feb. 16, 2009 -- Well, today I finished Champ -- again. I had some unresolved blending to do in various parts of the fur. Also some editing to do on the sweeping long hair of the tail. Now, again, I think I finally got what I wanted from this picture.
Some may respond to this picture as too cute. I enjoy it's cuteness, which I think is truly there, and appropriate to a representation of this animal, and which I might think of as outrageous. I also enjoy those two little "horns" on top of his head. That makes me almost think of him as a mythological animal. That appeals to my sense of fantasy.
Posted by Manuel Macarrulla at 1:24 PM