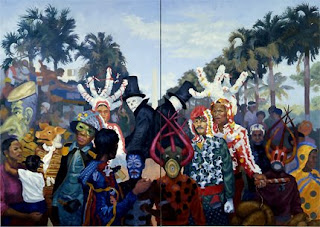 This painting is in the permanent collection of El Museo del Barrio.  In January, Puerto Rican artist Yasmin Hernandez was preparing Power Point presentations for El Museo's education department about pieces in it's collection. She contacted me then to ask whether this image refers to dictator Trujillo's assassination, whether it contains any other historical references, and asked me to explain more about it in the hope that it would help her develop her presentation.  My response to her questions follows:

The painting doesn't so much refer to Trujillo's assassination, as to the fact of his dictatorship.  Although, as do most of my references, it does so in indirect fashion.

The painting is the fifth in a series of  images that I made after having figured out the "Goat Song" gambit, though I had previously made three with the same intent.  The etymology of the word "tragedy" states that the word is derived from the Greek, "goat song."  The word "tragedy" is overused in our time, so I thought it more refreshing to use "goat song."  Tragedy is not merely a catastrophe, like a car accident, but has a specific set of properties in Greek tragedies: it is the story of a noble hero, such as Oedipus, who will get into serious trouble with the gods, and with other people, due to his flaws, and, eventually, find redemption.

So, who's the "noble hero" in my series?  It is the United States, with its high ideals and great potential.  When contemplating American intervention throughout Latin America (and much of the rest of the world, of course) I could only deplore the disastrous outcomes of much of what it had undertaken in the name of democracy.  In the series of eight pictures I have three references to The Dominican Republic, one of these also being a reference to the Spanish conquest, one to the 1983 invasion of Grenada by U. S. forces, two to U. S. intervention in El Salvador, and one to Nicaragua.

People seeing "Tumult..." may find it perplexing that the Washington Monument appears in the middle of this image  set in Santo Domingo (the object is pale, and difficult to see in the reproduction) and that the carnival parade shown takes place on a street called George Washington Avenue.  The presence of the monument is not my invention.  It is actually there, though much reduced in size in comparison with the original in Washington.  And George Washington Avenue is the name that appears on all the street signs, though the locals all call it, "El malecón."  The explanation for the name and the monument is simple: Trujillo was a big fan of the United States; the U. S. had invaded both sides of the island, early in the 20th century, and, on leaving, left Trujillo in charge of the republic.

The scene depicted in "Tumult..." is simply a carnaval, not layered with symbolism of any kind.  Only the world "tumult," itself, in the title, conveys a vague sense of unrest, though in fact it is only the movement of people and colors on a street.  Meanness in the image is only found in my cute idea to place two small, incidental figures holding up sticks on which are skewered what appear to be a human head and a pig's head.  Though Trujillo's historical assasination makes this association unavoidable, I didn't intend them to refer to any specific actions.  The main message remains the passive allusions to Washington.

Posted by Manuel Macarrulla at 10:15 PM