"Notes From a Trip to Santo Domingo (Detail: The Goat Feast.") 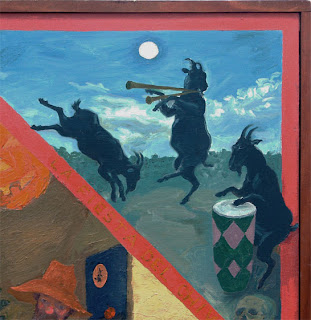 1983/96" X 48", Manuel Macarrulla/Oil on canvas
In the fall of 1982 I was awarded a 3 month residence at Altos de Chavón, in the Dominican Republic.  The time afforded me a great opportunity to sketch much of the exciting imagery that bombarded me every day.  On my return to the states, I was inspired to paint a single image compiling an assortment of those experiences to which I'd been exposed during the residency.  I took the Title for it from that of a little book, by Jose Marti, based on his own observations during a trip to the Dominican Republic.  The individual images are separated by a system of synthetic red lines, visible in the photo above.
Of course, this detail showing goats dancing in the moonlight is not something I literally saw. But, it so happens, during that trip I read a very well researched book, Trujillo, by Bernard Diederich, about the assassination of the Dominican dictator, Rafael Trujillo, in May, 1961. The title of this segment, The Goat Feast, also taken by Mario Vargas Llosa for his book  (The Feast of the Goat) about the assassination of the dictator, is from a song that was popular in the Dominican Republic in December, 1961, the lyrics of which are presented in the Diederich book.  The song presents a speaker who pleads to be allowed to see the slaughtered goat (Trujillo).
This detail was my first study for what I later made into "Goat Song #2: The Goat Feast."
Posted by Manuel Macarrulla at 11:57 PM