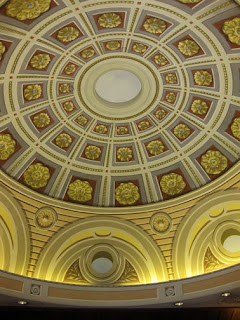 Did you know there’s a Richard Haas mural in the lobby of The Bar Building (executed under the auspices of Ray Guzmán), right there, in midtown, Manhattan, near Times Square, and near Grand Central Terminal? If you’re a person like me, with a passion for art, period, and for art in public places, this knowledge really tickles you. Why? If you need a reason, it’s because it’s worth knowing that there are big, unique paintings to look at outside of museums; art occurs in your workaday world, also. When you think about it, It’s neat that the experience is not limited to Florence, Italy. O. K., no need to carry the comparison further; it’s just neat.

Take what happened to me recently, as I walked on the avenue of The Americas. The unexpected thrill really hit me, when, as I passed 1290, 6th Avenue, I saw the big painting “America Today,” by Thomas Hart Benton, in the lobby. It was a museum going experience, right there in the midst of my day. I entered the building with baited breath, and started surveying the mad jumble of painted figures, swirling in circular patterns, like drips in some Jackson Pollock (who was Benton’s student, after all).

My camera lust took hold of me. Mostly, I go nowhere without my digital, and I use it, liberally, to document such encounters as this, or anything that strikes my fancy. I took out the camera. What happened next was less of a thrill. “No photos, please,” came the stern command from one of the lobby attendants behind the counter. Though deflated, I was polite. Although, after getting a last look at America Today, I left with revenge in mind. 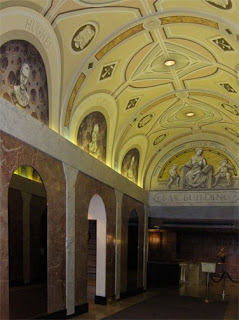 My revenge? To have a good life and go just a little further downtown, to The Bar Building, at 36 West 44th, between 5th and 6th Avenues. There I could see another good painting, the Richard Haas. And this one has the advantage that, in the few times I’ve visited it, no one’s ever told me I couldn’t take a picture. And, furthermore, I know this piece more intimately than I know most pubic art; I got paint drips on my face as this one was being executed.

Yes, in my youth, way back in 1983, Ray Guzmán, a painter I knew, had been retained to paint this piece, and he hired me, as part of the crew, with two other fellows,Tim Heinz and John Dean. Well, the work on this project was grand for us, as artists. I remember we would work after hours and had the lobby to ourselves. I remember the challenge, the sweat, the smell of my scaffold mate’s post dinner cigar breath, and I remember “The Walrus.” The who? The Walrus; the heavy set lawyer-type with a big mustache. He’s the one who passed through the lobby, sometimes, making unnecessary, judgmental remarks. 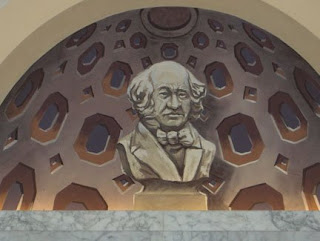 The mural's subject is decorative architectural elements and motifs related to the legal profession, such as the scales, the two-faced Roman God Janus, Blind Justice, and a series of eight portraits of luminaries from the legal profession such as Benjamin Cardozo and Martin Van Buren.

The Bar Building mural is executed in Keim paints on dry plaster (laid down ever so exquisitely by Italian workers.) It is executed in the typical Haas manner, that of simple, flat shapes, without incidental detail, in a light palette. This manner, which dominates the vast majority of the surface, is intrinsically pleasant. It’s in the part of the hallway's busts, and the figure of Justice that's there also, the latter handled by Ray Guzmán, in which a bit of painterly brush handling comes into play (the part I considered the most fun to do). There was also, initially, four marbleized columns underneath the dome, handled brilliantly by Mr. Guzmán. I always found them thrilling for their brightness of color and their verisimilitude. Sadly, they were removed, at some point.

As I’ve indicated, I’m a fan of public art. I hereby state my intention to blog on a weekly basis about public art. In the near future I will present Tova Snyder’s work, some of the beautiful subway tile murals I’ve seen, and the statue of General Sherman, near the Plaza Hotel, among others.

Posted by Manuel Macarrulla at 5:18 PM