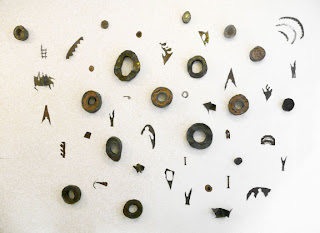 "The 5th Cardinal Point (The Point of Water.)"
by Janet Goldner
Welded Steel, 2009
Approximately 48" X 72"
A piece of sculpture made up of about 30 shaped and welded pieces of steel interspersed on the wall of sculptor Janet Goldner’s Tribeca studio called my attention.  “That piece is titled “The Fifth Cardinal Point (The Point of Water),’” she explained.  "In addition to north, south, east and west, in Bamana culture there is also the point of water,” she further explains.

Janet Goldner has traveled back and fourth from Mali to New York for many years, on a yearly basis.  She took her first trip to west Africa in 1973, spending 3 months in Ghana as part  of a study abroad program sponsored by The Experiment in International Living, Brattleboro, Vt.  That time she spent the whole year in West Africa.  It took her a long time to conclude that she could return there on her own.  Finally, she did so in 1985 as a participant in the U. N. Women’s Conference in Nairobi.  Then, in 1994-1995 she received a Fulbright to do research in Mali, working with potters, blacksmiths and contemporary artists.  She spent 8 months there on that occasion.  Since then she has returned on a yearly basis.

The culture of Mali holds a strong pull for Ms. Goldner.  But she was very affected by the devastation inflicted on it by the region’s colonial history.  The French colonizers succeeded so well in suppressing the country’s native culture that many of its vital elements disappeared or were seriously compromised.  Many aware people living there today conduct ongoing discussions and debates in the effort to pin down the truth of Mali’s history and cultural identity.

Janet Goldner’s personal goal is to provide support to the ongoing campaign of cultural recovery there.  To that end, Janet works with the Malian group called Groupe Bogolan Kasobane, composed of 6 artists working collectively and individually since the late 1970’s.  One of the group’s successes is the world wide reintroduction of mud cloth (bogolan), which had nearly disappeared.  She also has an ongoing collaborative relationship with a Philadelphia group called Cosacosa.  Janet is slated to conduct interviews in, and photograph its project about community and family in Mali, documentation that will be published on the web. The project will take place in Mali this summer and in Philadelphia next fall.

Mali is the largest producer of cotton in Africa, yet the last factory that produced cotton cards (the necessary tool used to comb out cotton for spinning) closed in West Africa in 1958.  A partnership with a Malian individual has also allowed Janet to aid in the production of cotton cards for distribution to Malian fabric manufacturers.

Janet Goldner communicates roughly in Bamanakan, the language spoken within the native Bamana culture.  In many parts of the land she also communicates, orally, in her quite fluent French.  She has built many strong relationships there.

Janet Goldner remains in New York from 2/3 to 3/4 of each year.  She makes art in both places, but, so far, her time in New York has been more conducive to the production of finished art, while Mali calls her to be out in the culture more.  She feels she is “always in both places,” rather than always looking back to her stays in Mali.  Yet her art continues to take influence from her African experience.

Ms. Goldner recently received a Fulbright Specialist Grant to teach at the Art Conservatory in Mali, where she will be going in May.

Posted by Manuel Macarrulla at 11:13 PM