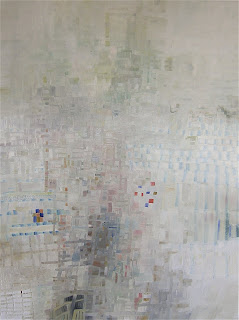 Kenise Barnes Fine Arts, an ambitious art space in Larchmont, New York, is hosting an exhibition curated by Katarina Wong, with Kenise Barnes, titled The “O!” Show (also on the web at: http://www.kbfa-the-o-show-.com)  The premise of the show is to share the “optimism, enthusiasm and buoyancy,” inspired in so many by the outcome of the last election, though it makes no overt political statement.  It would have been mounted shortly after the election, but prior scheduling at Kenise Barnes’ space precluded this.

It may be that the artists presenting their work in this show would have worked in just the same way if the theme had not been proposed to them.  But the theme was, indeed proposed, and so it functions as a point of focus for the artists and for the public.  In so saying, I maintain that the artists’ own inspiration, plus the curatorial framework, leads art to perform a social function, despite its lack of a political role in the real world.  This visual poetry facilitates a meditation on what the 44th American President engenders in so many, not only in our nation, but around the world.

I saw the artwork during the process of installation, but I’m confident that, at the opening, the viewers felt much the same joy I did when I regarded it.  My first glance, without much concentration or scrutiny, imparted that definite joy through lively color, and a certain variety and deftness.  On looking more closely I was not disappointed.

Johathan Allen’s piece, “Be the i Pod,” paint and ink on paper, 2008, struck me as the funniest piece I’ve seen in a while.  The work, organized in a way this artist favors, with collaged parts, and other sections that imitate collage through rendering media, breaks up the surface into an organized salad of crumpled passages with torn edges.  A leaf and vine motif, in the upper part of the work, mimics the emblematic white cord of the i Pod, which, itself, is seen distributed in four places, over fragments of the silhouetted enraptured i Pod listener.

Among Hovey Brock’s contributions is “The Pitch,” inks, watercolor, and acrylics on absorbent ground panel, 2008.  The piece, a 30” X 22” painting, is made with cut silk screens through which the artist has “forced” his paint.  As does this artist’s other work, it demonstrates a remarkable dissolution of matter, for the element of paint could quite convincingly convey the illusion of solidity and weight, yet this does quite the opposite.  The sheerest veils of color appear to actually lose their physical body, and become light itself.

Jossette Urso regales us with “Starr Street Haze,” 48x36," oil on canvas, 2008.  This work retains the ebullience, and, always, spontaneity, that I’ve seen in the artist’s work since I first saw it, in 1988, though this strain of work, in some ways, is quite a departure from her work of years ago.  And, here, perhaps more so than with much other art, it pays to see the actual work, rather than even the best photograph, because much of its quality is transmitted through the physicality of the brush stroke.  In the flesh the stroke retains the texture of every bristle.  This person does not belabor her statement.

Beth Dary’s “Emanation,” glass, 2008, is comprised of glass bubbles of different sizes, lumped together into modules through the glass blowing process.  It transmits a great joy, and elicits the admiration due a person with the technical savvy to execute such a thing.  The large bubbles contain a volume of air sufficient to make them float on water, though the gallery will not exhibit this property.  Their installation places them in the space’s front window, from where they cascade down to the floor level like the toys our children rough house with abandon then leave for the parent to pick up.

“Valencea,” rhizomes, Styrofoam, acrylics and ink, 30” X 24” X 18”,  2008, by Andra Samelson, is a suspended piece, hanging from the ceiling by fishing line.  It is constructed as a meandering wire enclosing a volume of space, along which painted spheres occur periodically.  The coloring agents disguise the styrofoam quality, so I was surprised when I touched it gently, and discovered its true lightness.  The deep blue and white color combination used throughout the piece is quite handsome, and the unassuming materials render it approachable.

The sophisticated, tight rhythms in Susan Chrisler White’s paintings are among the things in this show that most say, “skill.”  She uses a rapid gesture that moves the eye forcefully, while retaining a fresh paint application.  These pieces defy immediate understanding as to the process of their construction.  They seem reminiscent of Rorschach tests, and may appear related to printing and even to the batik process.  But, in fact, they are paintings made on glass and then pressed onto the painting surface.  Ms. White’s versatility also produced the intricate and very lively colored system of hanging objects at the front of the gallery space.

Katarina Wong’s intricate, “obsessive,” magical, special effects vortex drawing us irresistibly toward some distant, centrally located source of light, also shows a great deal of skill.  Ms. Wong is also an artist to use a fast gesture, and those entities undulating along the trajectory of what appears to be a vast amount of wire unrolled from what must have been a gargantuan spool, seem to move at a very rapid rate, indeed.  I imagine that if this painting had a soundtrack it would be one of those very driven, endless pieces by Phil Glass.

The O! Show will run from March 7 - 28, 2009.  Kenise Barnes Fine Art is located at 1955 Palmer Avenue, Larchmont, New York.  Travelers from New York City can reach it conveniently via The New Haven Line from Grand Central Terminal, which arrives there in 35 minutes.  The gallery is a short walking distance from the Larchmont Station.  Gallery Hours: Wednesday thru Saturday 10 – 6 and by appointment.  Call the gallery at: (914) 834-8077.

Posted by Manuel Macarrulla at 12:12 AM