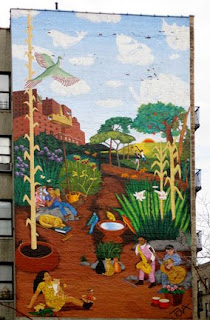 Walking on Sheridan Avenue and Marcy Place, in The Bronx, recently, I happened onto the mural “The Secret Garden,” by Tova Snyder.  It was mid February, about the same time I started this blog, and it wasn’t long before I got the idea to write about the mural, and public art, in general. Instantly I felt the excitement about a piece of art of this scale and ambition.  And one that is so packed with bright color, and constructive elements, and a positive outlook.  “The Secret Garden,” painted in 1991, was Ms. Snyder’s first big commission, and she has continued to paint murals, whenever possible, ever since.  She gives particularly free reign to her passion in murals, which she finds “liberating.”

An interesting part of the mural’s history is the damage it suffered in the year 2000.  A construction crew was asked to patch some damage on a small section of the sky.  The crew misunderstood, and covered over the entire surface of the image with cement.  Two days later the cement was water blasted off.  Though the image was visible, fading, and damaged passages remained.  In 2002, Tova Snyder, with two assistants, restored the entire six story image in one month’s time.

When I set out to write about this work I planned to spend some time going on about the charm of the piece, and the various engaging elements within it.  But, as I looked at the information the artist, herself, so generously provided, I decided that a large part of the feature should consist of her own statement on its creation process.  Artist’s statements have intrinsic interest. 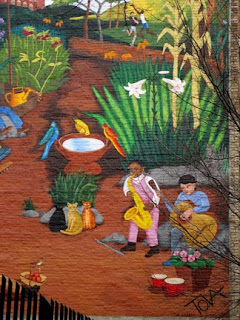 Below is Tova Snyder’s own statement on the creation of “The Secret Garden”:

"The [Secret Garden] was designed for the community and it was the community who voted for the design in an open competition. I was glad about the process because I did not want the community to feel that an outsider was coming in and imposing her ideas. I even adjusted the design, after they voted on it, to include some of their input. I wanted the community to know that I was sensitive to their ideas and that the mural was theirs.

"Across the way [there] is an elementary school and I made my mural to be like a story book unfolding [for] those young minds.... I put in things that I thought they might notice over time, such as hidden cats, including three oversized ones that represent three continents and clouds in the shape of endangered species. I made a bird house as [the] NYC skyline. I was asked by the community to put their school in the mural [, and I did]. I also painted a mural on one of the buildings in the mural - a mural within a mural! The Developer's name is Sparrow, and so I put the sparrow in for symbolism as well as the five apples in the basket among other... things.

"When I was up on the scaffold I often noticed neighborhood boys running around below, some even throwing rocks around. The site was on an open lot that was going to be turned into a community garden. One day I came down and asked them straight out "are you boys here to help me"? They seemed stunned and all nodded their heads vigorously. So I found them all tasks to do.... I tried to encourage all the boys I encountered to be on the creative path and I did let some of them help paint the blank wall on the ground level.

"[One] boy... came by with his pet dog.... [and,] unbeknown to him, ...his dog became part of the mural, with a flower in it's month to symbolize peace. He came by [another] day with his cousin and he still did not notice, but when his cousin yelled out, "Hey look, there's your dog in the mural," I was able to witness his whole face transform and brighten. He declared "I'm going to grow up to be an artist!"

"The girl holding the dog is wearing a dress with symbols from two ancient civilizations, Egyptian and Mayan, with an "open book" symbol added.  When I was a child, books were a great way to explore so many possibilities, so many worlds, and so much information."

Below is the text of an e-mail sent to Tova Snyder just recently by one of those boys she mentions in the passage above:

"I was twelve when we met so I don't expect you to remember me. It was the summer of 91 and you were painting a mural on sheridan ave. Maybe the third or fourth day I was playing crate ball with my friend while watching you paint (I actually had a crush on you.) I stopped playing, went over to talk to you during your break and you wound up allowing me to paint parts of the wall then and on the following days. I have remembered those moments almost everyday troughout my life and had wondered what ever happened to that pretty, young, and talented artist. I have always remembered your first name but it was at a gathering in the neighborhood talking about that time with some friends that someone pointed out that your entire name was on the bottom of the mural. I see you have been busy and have had great success since.... Congrats, and I wish you much more. Thanks for the memories and the positive influence you had in my life."

The young man, who now performs in the genre of hip hop, and goes by the professional name Kaotick, is currently on tour.  A sampling of his music may be found on Myspace at Myspace.com/givekaotickairplay.  He will return to New York in June. 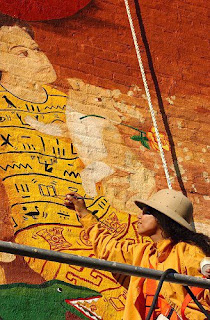 Posted by Manuel Macarrulla at 12:09 AM