Alice Zinnes, showing oil paintings, watercolors and drawings at Ch’i Contemporary Finer Art, in Williamsburg, presents work that is formal, brimming with clean, coordinated color, and neat, despite its vigorous execution.  She’s a landscape painter at her core, but one that draws inspiration from the Ramayana Indian Epic, and from Celtic mythologies, as she states in her artist’s statement.  She does not spell out the personal aspect of her involvement with these traditional sources, but, at the very least, she’s taken with some beguiling characteristics they possess.  These spur her on to produce her abstractified landscapes.  This reflects in her color choices, and, therefore, the mood conveyed. 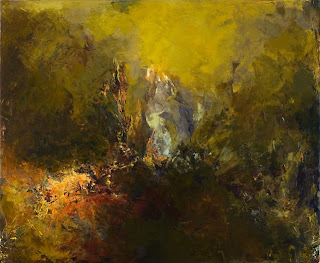 In “Ancestral Fire,” a large mass of dark color in the foreground suggests a mound of earth, upon which stands a mass of pale color, which suggests, vaguely, a spot lit protagonist.  This tableau, the centrally located character surrounded by evocative masses of “foliage” beyond, elucidates a charged moment related to some transition or action.  There is a largeness in the scale; a firmness to the ground plane, despite the gaseousness of the paint application.  The spot lighting of the figure is also a crescendo of attention, maybe denoting a resolution of some mythic sequence of events. 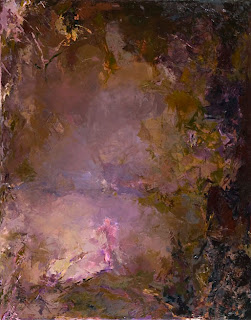 "Beyond Night to Day."

In “Beyond Night to Day,” a mass of darkness, curving up from the somber, but succulent, olive greens of the floor, and wrapping over the top of the image, blankets this vision in a kind of protective embrace.  My subjective vision of the image has it that the figure, again appearing as a somewhat undefined highlight, stands before placid lake waters, with a bluish accent hinting at the landscape on a distant shore.  Again the figure stands in a large place, poised on a moment of transition.  The colors here, as they do generally in this show, elicit some mood I couldn’t name.

In some of the pictures, oils as well as watercolors, Ms. Zinnes provides no grounding plane.  A case in point is the oil “Light in the Dark,” which appears almost as a look straight up to the sky.  In this unsettling vision there seems to be no gravity.  Here I miss the focus, however suggestive, that the artist usually provides, and the sense of mood and purpose that goes with it.

The three large charcoal drawings in the show are quite handsomely handled.  Each is on a tinted paper that recalls, for me, the SoHo artificiality of the tinting changes in passages of the 1984 release of Fritz Lang’s “Metropolis.”  At the same time, the artist achieves in them a Rembrandtesque tonal range.  They evoke, quite believably, hillsides full of bushes and brambles.

Ms. Zinnes’ watercolors tend to be quite delicate, and light filled.  Some delve into the lack of gravity mentioned above, but most suggest the sense of landscape and characters I found in the oils to which I responded most positively.

One further note: concurrently with Alice Zinnes’ pictures, Ch’i Contfemporary Fine Art is showing the work of Sy Gresser, a maker of accomplished, massive figures in varying degrees of abstraction.  These have an interesting compatibility with the painter’s oils, and, once or twice, I wondered if they might inhabit their mythic settings.  They are hewed, with great self assurance, out of large girthed trunks of colorful woods.  Sometimes the wood has spots of a reddish brown along side a bright yellowish color, which enhances their sense of fantasy.  Those who come to the gallery during this exhibition will receive a double treat.

Posted by Manuel Macarrulla at 11:43 PM