Writing in The New Yorker’s April 6, 2009 issue, in his article titled, “Bearing Fruit: The Art World (Norton Simon’s Taste in Paintings,)” Peter Schjeldahl wrote, in part, about his experience in visiting a certain painting at the Prado.  I was so astounded to read what had been my own thoughts, as I stood before the same painting.  I could have said all the same things in my blog entry of February 13, My Visit to The Prado, but I opted to give a less detailed account, instead.  Now I’m thinking, I wish I’d said that. 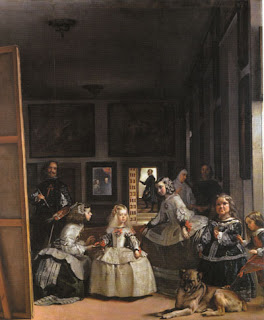 Here’s the pertinent excerpt from the Peter Schjeldahl article:

“ We know what a great painting looks like while we are looking at one.  Turning away, we don’t exactly forget, but our recall of the experience -- how we felt, looking -- starts to edit what we saw.  Some details and qualities are magnified, others evanesce.  With time, the picture becomes ever more ours and less the painter’s.  My several visits to the best painting in the world, Velázquez’s “Las Meninas” (1656), at the Prado, instruct me in the phenomenon.  My first reaction is always disappointment at the coarse, almost drab, handmadeness of the big (but smaller than I thought) canvas, the absence of a glamour that I have cherished in memory and may have refreshed by contemplating glossy reproductions (reproductions are pandering ghosts, they tell us what we like to believe.)  Then, rather abruptly, I find myself under Velázquez’s spell again, as if I had never been before....”

And so it was for me:

*the feeling that Las Meninas is a great pinacle of art;

*my initial disappointment -- its coarseness and drabness;

*the “handmadeness” (including the visibility of the stitching between the sections of canvas that make it up;

*the “smaller than I thought” feeling;

*missing the gloss of reproductions;

*then, falling back under Velázquez’s spell.

I’m glad to know that the writer feels as I do.

Posted by Manuel Macarrulla at 11:03 PM