"Hex," The Art of Nancy Lunsford at 440 Gallery 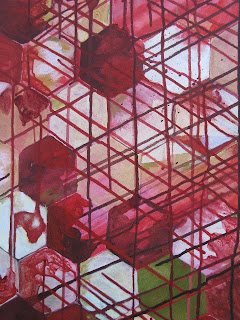 At her 440 Gallery opening, on april 2, Nancy Lunsford served, in addition to the wonderful cheeses, wine, and other goodies, hexagonal crackers.  That points to her humor, as well as her obssession, since every painting in her show has the hexagon as its organizing principle.  The bright streak of a vermillion red in her hair, so in synch with the palette of "Red Hex," the painting before which she sat, as we discussed her work, might be evidence of the same thing, if this coordination wasn’t simply coincidence.

The singular character of each effort stands out, in this show.  Ms. Lunsford is not one to take successive pieces to the same destination where she has arrived before.  Queen, 2008, for example, the largest painting in the show (5’ X 7’), a color field picture predominating in yellows of cadmium and lemon, and blending into pinks of differing strengths, spiced throughout with modicums of green, is vastly different from the more tonally harmonious, Bone (Contained Crazy), 2008, and Study (Contained Crazy) 2009.  The latter two show colors with clean identities, in which a pink is clearly pink, but retain a “silvery” quality.

Other differences include the translucency of the field in Queen, in which color without borders blankets a clearly visible, pencil drawn, geometric pattern, in contrast with the opacity of color in most of the elements of “Bone” and “Study.”   Also, whereas the former is stretched on a standard rectangle, the latter two are on 23” equilateral triangle stretchers.

Bone and Study hang together on the gallery wall, in very close proximity.  The artist sees them as independent pieces, which, by their compatibility, can be seen as complements of one another.   Interestingly, they can also, if the inspiration takes Ms. Lunsford, have four other 23” equilateral triangle paintings added to their number to complete one large hexagon.  Such is her process.

The red painting, mentioned above, gave me great joy.  Its uniformly “wet and juicy” paint application may make you salivate.  The wet “thuds” of the brush elucidate the hexagonal pattern without undue reverence.  The color palette, as mentioned, is of passionate alizarin and vermillion.  The hexagonal motif is very comfortable within this tondo (round) surface, a format I would like to see more often in painting.  Furthermore, the wetness of the paint is such that the artist deliberately held the tondo in two different orientations, thereby creating a pronounced curtain of drips from the corners of her hexagons first this way, and then that.  The resulting complicating element has a precise character that’s paradoxical given the chanciness of a drip.

Nancy Lunsford studies seriously.  She draws regularly, engaging in figure drawing with a drawing group at her studio, and drawing plenty of geometric patterns on her canvases and on paper, in graphite.  She refers to her draughtsmanship in words akin to “simple drawing,” showing, perhaps, a healthy respect for study, and a wariness of a concern with “the big performance” to the extent of foolhardiness.

“Hex,” The art of Nancy Lunsford

The 440 Gallery is convenient to the F Train's 4th Avenue and 7th Avenue Stops, and to the R Train's 9th Steet Stop in Park Slope, Brooklyn.

Posted by Manuel Macarrulla at 12:14 PM