Art and Man Talk (The Paintings of Wayne Moseley)

Wayne Moseley is a painter who lives in South Brooklyn.  I became acquainted with him 23 years ago, when we worked together for a time.  We had not seen each other for years, when we chanced to meet in Park Slope, last year.  In February he invited me to an informal get together, at his studio, with a few friends.  He served crackers, slices of cheese and spicey Italian Sausage with wine.  A few of us shared some man talk. 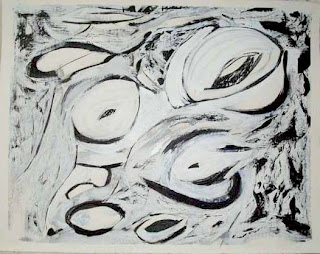 Wayne Moseley's paintings engulfed us teemingly.  I would not have put so many paintings out to show.  But there they were, chatting us up, comfortably; a painter's paintings, made by a painters' painter. There was that familiarity of this art I'd never seen before. The rapport was immediate: I sensed Wayne's logic; shared his delight in visual activity; prized that sensuality of paint.  We seemed to agree on what questions to ask: does the shape look forcibly filled in, or do its contents fill out a space with ease?  Does a given image need the two feet of canvas at the bottom? 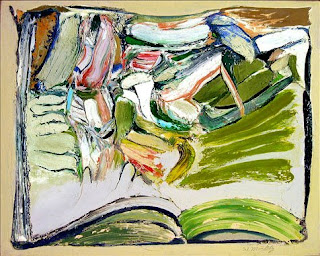 "Reader's Flower"
Oil on Canvas, 2005
16" x 20"
I couldn't tell you now the meaning of any of it.  I couldn't tell you the meaning of Wayne's titles, though we probably did discuss them. While we drank the wine, laughed with abandon over silly stuff, and reached the point of cursing a bit, the paintings kept us company.
The Realm of Art was just as silly as we were: Wayne told us that some man, who had previously shown no interest in art, had come into his studio and liked a certain painting. Which one?  The one with two penises coming out of a pair of pants.  I refer you to "Book of Changes #10," below.  If you can find the two penises and the pair of pants you get the Freudian Symbol Award, 2009. 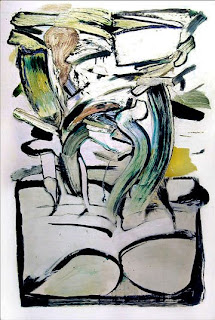 Posted by Manuel Macarrulla at 11:28 PM